BEIJING (Reuters) – It’s official. Hungry foreign hordes craving a fix of diced chicken fried with chili and peanuts during the Beijing Olympics will be able to shout “kung pao chicken!” and have some hope of getting just that. As it readies for an influx of visitors for the August Games, the Chinese capital has offered restaurants an official English translation of local dishes whose exotic names and alarming translations can leave foreign visitors frustrated and famished. If officials have their way, local newspapers reported on Wednesday, English-speaking visitors will be able to order “beef and ox tripe in chili sauce,” an appetizer, rather than “husband and wife’s lung slice.” Other favorites have also received a linguistic makeover. “Bean curd made by a pock-marked woman,” as the Beijing Youth Daily rendered the spicy Sichuanese dish, is now “Mapo tofu.” And “chicken without sexual life” becomes mere “steamed pullet.” According to one widely repeated story, the Chinese name of “kung pao chicken” comes from the name of an imperial official who was fed the dish during an inspection tour. With the Beijing Olympics 51 days away, a notice on the city tourism bureau website ( www.bjta.gov.cn ) told restaurants to come and pick up a book with the suggested translations. In China, where meetings are almost as popular as banquets, agreeing on the English-language menu has taken many rounds of discussions over previous drafts since last year. Just as predictably in this country where nationalism and the Internet make a potent brew, controversy has already broken out over the blander new translations.  “I don’t like this new naming method, it’s abandoning Chinese tradition,” one Internet comment declared. “There are many stories in the names of these dishes.”

We are back! Patrick and I had our first Mandarin lesson here in Shanghai last night, and I have to say, it was mildly odd seeing the same picture books from the 70’s and experience the same style of teaching half way across the world. Jo Ann, if you read this, I think you would have been proud of how much we remembered during our review. We could say many things about pencils, maps, cats, and trains. We were really excited when our instructor “Apple” said that they usually skip the Chapter 10, the most challenging grammar lesson, and pick it up again after Chapter 20! And over-achieving Patrick was very pleased when Apple said we would be able to finish the book during our 100 hours with her/Berlitz. We shall see. I will be very happy if I can communicate with taxi drivers and the cleaning lady. Those are my – maybe not glamorous – but very practical short-term goals!

ps- Anyone interested in learning Mandarin (or at least hearing it), should check out chinesepod.com – I am a free subscriber which means I can download podcasts, listen to them, and practice the intonation over and over… (when alone in the apartment which is most of the time! Just wait till I get an ipod in the US…then there is no stopping me).  I think the instruction is really very good!

Chinese get English ones, English ones get Chinese ones, what do Turkish ones get? Changing countries and languages so often hasn’t been easy on my name. Poor thing, suffered so much over the years. During our time in Europe, we actually had a period of mild recovery – after only one or two repetitions, the Austrians had mastered it – only sometimes did it become “burCHu” instead of the rolled-back-of-the-tongue (almost silent) “r” and “j” combination. But we could live with that. 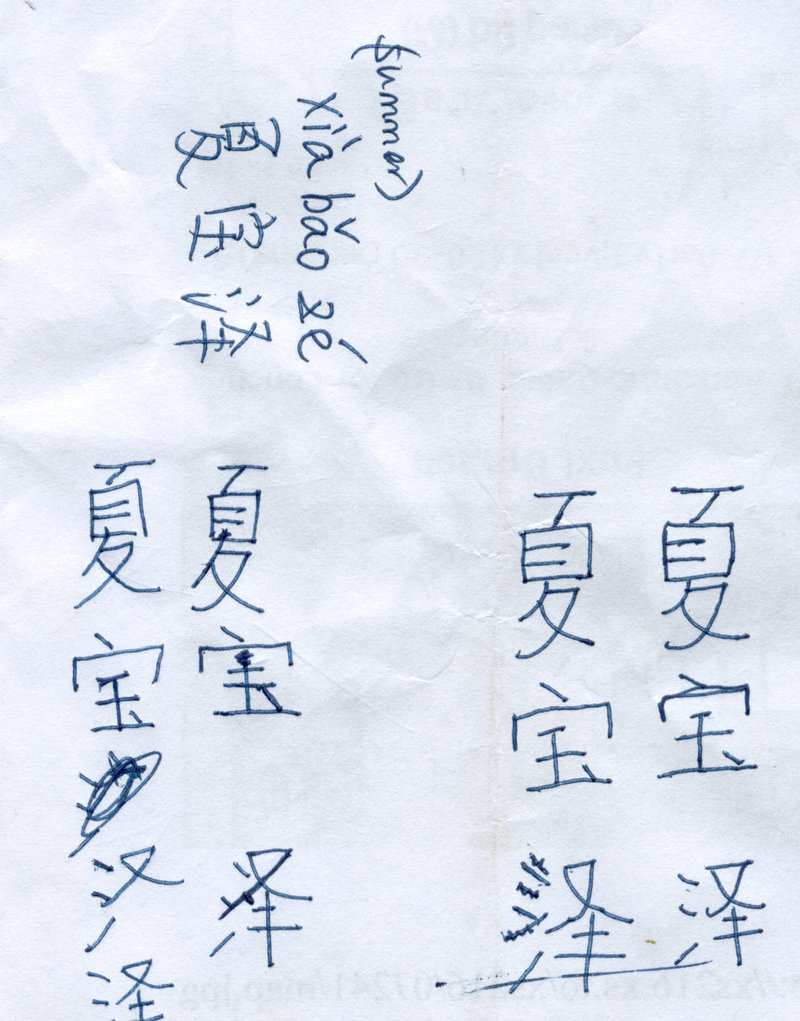 Sensing the high risk of again being badly bruised and mutilated here in China, I decided this time to spare it the humiliation. So “Burcu” is going into hiding. Please don’t think of it as an affront to Burcu, as I really only have its best interest in mind. In its place, please welcome the tried-and-true “Berszhu” for the Americans among us and “Bao Ze” for the Chinese. Actually, as Bao Ze is so new and cannot yet be left alone, it is to be accompanied by “Xia” (which means summer in Chinese and when pronounced correctly sounds very much like Scherr). Xia Bao Ze as it would be written here – actually it wouldn’t be written at all like that here – it would be written using Hanzi characters (see image). The newly-found Chinese friends who created my name at an expat dinner a couple of nights ago insisted that this was a very lucky name, because of the way the characters were formed, one part actually means Mao, like Chairman Mao. They could have told me anything, and I would have believed them. Anyway, they convinced me that this would be a very good name in China, so I practiced writing it over and over to the point they told me to stop and eat my dinner. But I was so proud of my new name, I turned to Patrick and pronounced it with all the right tones, which his novice ears mistook for “xiao bao zi” which actually means “small bread dumpling.” With the Chinese contingency laughing and thinking he is very clever, he firmly announced THIS to be my new name. Turns out that the “bao zi” is a derogatory name used for people with a big head.